Re-prints of technical papers featuring Downing products and solutions from publications like AADE, SPE, and more.

The paper presents the early field application of a new multi-chamber frac valve, placed between the frac head and lubricator, to improve the efficiency and safety of plug and perforate completions. On two Midcontinent wells, the valve enabled continuous frac operations and wireline transitions in 8 to 15 minutes (subsequent well transitions were performed in 3 to 5 minutes) while reducing personnel safety exposure and eliminating certain operational risks including cutting the wireline.

The new system was developed to make it faster, easier and safer for crews to deploy perforating and frac plug assemblies during multi-stage frac completions. The system is comprised of two hydraulically actuated flapper valves that are enclosed in a cabinet, which also contains a computer that controls valve operation. A quick-connect latch on top of the upper valve enables easy connection of the wireline lubricator. During each stage of the completion, the multi-chamber valve equalizes pressure between the surface/lubricator and the well and enables wireline conveyed tools, balls and collets to pass easily between the surface and the well without pressuring down and re-pressurizing the flow iron.

The paper describes an early application of the multi-chamber valve on two multi-stage wells in the Midcontinent region. On this job, the valve was not equipped with the quick-connect latch for attaching the lubricator. As configured for these wells, two conventional valves could be removed from the frac stack, and the new system provided a dual barrier above the frac head. Only two hydraulic lines were required for valve actuation. No backside pump was needed to equalize pressure in the lubricator. During the completion process, the system’s valves were remotely operated from a control cabin, eliminating the risk of severing the wireline through human error. Remote control reduced the need for crew members to work at height in the red zone. Two swaps were performed at each stage in 8 to 15 minutes each, compared to 40-60 minutes per swap using common practices. On two 25-stage wells, the new valve saved at least 25 hours of operating time. In addition, the valve enabled a quick response to close in the well after a wireline failure, enabling the immediate resumption of well control.

The paper also provides a brief operational summary of the system using the multi-chamber valve coupled with the quick-connect latch on a three-well pad in Wyoming, during which wireline swaps were performed in an average of three minutes each. 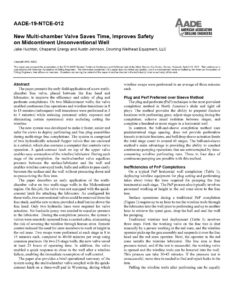